Posted on November 7, 2015 by jeffjacobsen 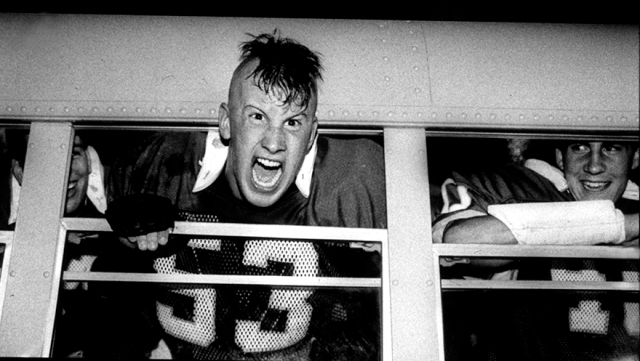 High school sports are in one word – beautiful. For the most part, there remains a pureness in the hearts of the coaches and players that reveals itself in wonderful photographs. If only photographers took the time to delve deeply into their hearts to find the purest essence of sports, they would find that essence is not actually on the playing fields.

Like any young photographer, I loved shooting action. I still do. That is what is all about, right? Pounding down the football field, slamming home a shot or canning a big three-pointer. The big stars making big plays. It took time and photographic maturity to see there is so much more to any game or match than the action on the field. That is where high school sports excel. The emotions of players, coaches and fans remains so wonderfully raw if only a photographer looks away from the action.

The first example in this two-part story is a photograph I made of a Topeka West football player in the mid ’80’s. With a Friday night victory, the Chargers qualified for the state playoffs. Water drenched the coach, cheerleaders leaped into the arms of the players as fans deliriously followed the team to the buses that would take them from Washburn University’s Moore Bowl back to their school.

Football success at Topeka West has always been rare. One jubilant player enjoyed every minute of the celebration. Even on the bus, with his mohawked head stuck through a window, the player never stopped roaring with delight. Surely his head remained jutted through the window and his exultation heard along the four mile journey to the school. Even the paper’s news editors deemed the moment as newsworthy and tore up their front page to lead with the photograph.

Sadly, this photograph is bereft of such exhilaration. In the fall of 1981, Phoenix Union High School in downtown Phoenix closed out its football season and its amazing history. The beautiful school constructed in 1912 would close in the spring. Once a power that won 25 state football championships, declining enrollment left the team stripped to the bone by 1981. The Coyotes remained winless going into their final game of their final season.

In a stadium with a capacity of 23,000 that hosted the NCAA Salad Bowl from 1948-1952, the team gathered before their final game in a portion of their locker room lit only by a single light bulb for their final emotional pre-game pep talk.

Cheerleaders stretched a paper banner between the two goal post supports as the players charged onto the field. With his arms upraised as he sprinted onto the field, the Coyotes’ starting quarterback caught his right arm on the goal post and dislocated his shoulder.

Thank you for reading my blog, Here I Stand. You can read all about me, my wife and my family on the Family page. God bless and keep you.
View all posts by jeffjacobsen →
This entry was posted in America, Arizona, Education, Football, History, Journalism, Kansas, Photography, Sports and tagged Arizona Republic, Beauty, High School Sports, Phoenix, Phoenix Union High School, Photography, Topeka Capital-Journal, Topeka West Football. Bookmark the permalink.